Lost and Found
by Ron Padgett

“Man has lost his gods.
If he loses his dignity,
it’s all over.

What did I mean?
First, that the belief
in divinity has almost
disappeared.

By dignity
I meant mutual
self-respect, the sense
that we have some right
to be here and that
there is value in it.
(Values are where
the gods went
when they died.)

My dog Susie doesn’t seem
to have any values, but she does
have Pat and me, gods
she gets to play with and bark at.”

Pondering this while walking on the beach. It’s more accurate to say that what is disappearing is the old ways in which humans conceptualize divinity, but I’ll give the poet his license.

Dogs have dignity if we humans stop considering ourselves at the top of a hierarchy. We measure canine consciousness by our own when we have no clue what the experience of a dog running free on the beach is to our four-legged companion.

Likewise ourselves. We all have the right to be here and we all have inherent value. The labels framed from corporate religion are fading.

It’s been a month since the initial diagnosis: prostate cancer, early stage, and the fog  of the mind has lifted. One of the major problems with this disease is the choices that a man needs to make, including doing nothing. A typical incidentaloma hidden beneath no symptomatology and normal testing. Blood tests and a CT scan show everything is likely encapsulated.

The committee of the mind, however, took the topic and got really raucous. That lasted off and on for a couple of weeks. One particularly pessimistic member even wanted to form a subcommittee to write an obituary.

Fortunately Jon Kabat-Zinn won the day. “Mindfulness is paying attention on purpose non-judgmentally in the present moment as if your life depended on it.”

After several specialist visits, many conversations with Sherry and some quality beach walks we decided to proceed with IMRT and adjunct hormone therapy. You can Google it for details as I’m tired of describing it. On the positive side, I’ll be increasing my net worth with tiny gold markers. We are anxious to begin treatment as it takes many weeks of small steps toward our twenty-year plan.

I am surrounded by Sherry, Allie, Kinnon, family, friends and our wonderful AA community. Life is good, just not what I had planned this year. No, that’s not quite true: I decided in January to work on my character defect “control.” 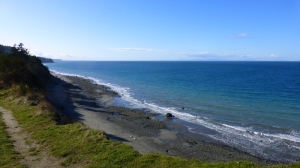 It’s been several months since I’ve been moved to write and a great deal has happened since then, so I’ll recap in this first post of 2013.

When we were visiting friends near Richmond, VA last year I noticed a feature they had that I really missed from our house in Port Townsend: the lack of need for window coverings. Set out in privacy of the woods, their house was a sign that our Lake Stevens house was just not safe and inviting.

One of the first things we did when we returned from that trip was to call our marvelous real estate agent Ken Nichols and plan for the move back to Port Townsend. The house went on the market August 7th and less than a month later we were living in our motorhome in Port Ludlow. Three weeks later our house closed and we were truly homeless.

The search here on the Quimper Peninsula took two months as we visited very neighborhood. Checklist in hand, we examined fifty-plus homes, several more than once. We kept returning to the Bell Street neighborhood, located west of the county fairgrounds. Bell Street is laced with walking trails and a ten minute walk to the Strait of Juan de Fuca. We made an offer on one house, but the condition of the house during inspection led us to look elsewhere.

The day after the inspection on the first house our current house came on the market. Sherry was in BC, but I toured the house and told the agent we wanted to make an offer. Sherry agreed the next day and we had a signed agreement two days later.

Today we look back at the move with gratitude. The flowers of spring are surprising us in the front yard and wild bird song is competing with the chickens next door (we traded oatmeal for fresh eggs this morning). Life is good!

Our trouble is not the over-all absence of smartness but the intractable power of pure stupidity, and no machine, or mind, seems extended enough to cure that.
- Adam Gopnik
One doesn’t discover new lands without consenting to lose sight of the shore for a very long time.
- André Gide

Believe nothing, no matter where you read it, or who said it, no matter if I have said it, unless it agrees with your own reason and your own common sense.
- Buddha

We need another and a wiser and perhaps a more mystical concept of animals. Remote from universal nature, and living by complicated artifice, man in civilization surveys the creature through the glass of his knowledge and sees thereby a feather magnified and the whole image in distortion. We patronize them for their incompleteness, for their tragic fate of having taken form so far below ourselves. And therein we err, and greatly err. For the animal shall not be measured by man. In a world older and more complete than ours they move finished and complete, gifted with extensions of the senses we have lost or never attained, living by voices we shall never hear. They are not brethren, they are not underlings; they are other nations caught with ourselves in the net of life and time, fellow prisoners of the splendour and travail of the earth.
-Henry Beston